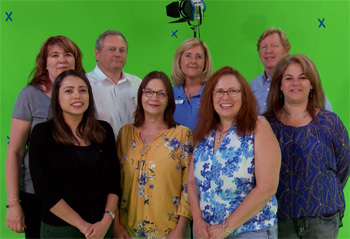 Academy Board of Director Bios:

Our Board of Directors is comprised of a rich variety of professionals: Diane Strand – Founder, Chairman of the Board; Scott Strand – Co Founder & Board Member; Celeste DuCharme – 1st VP, Board Member; Darla Delayne – 2nd VP; Lynn Cohen – Secretary; Johanna Lack – Board Member; and Donna San Miguel – Board Member, who’ve come together to create collaborative visual and performing arts programs. We are always looking for industry professionals, valued business people, and community leaders for our Board.

The JDSCA Board has collectively over 100 years of professional industry related experience as producers, directors, writers, musical directors, and actors, as well as in video production, stage production, and as educators. The board brings a wealth of experience having worked for companies such as; Disney, Universal, and Warner Bros; on television shows such as: General Hospital, Friends, Survivor, Celebrity Apprentice, Celebrity Ghost Stories, Good Day Temecula, Design on a Dime, and House Hunters; and the major release films Tyson and Last Man Standing.

Diane Strand – Founder, Chairman of the Board:

Diane Strand is the majority owner of the multi-award winning JDS Video & Media Productions, Inc. The
Producer at JDS Actors Studio and Founder of the nonprofit 501c3 JDS Creative Academy. In addition, Diane is the Creator and Executive Producer of the show Spectrum of Innovation news and information for Riverside
and Digifest Temecula. Click here for full Bio

Scott is an industry professional in several disciplines of visual and performing arts, and an accomplished Actor, Director and editor. He is an owner operator of his own Production Company & Acting Studio JDS Video & Media Productions, Inc/dba JDS Actors Studio. Scott is the master Acting Coach at JDS Actors Studio and has trained several actors who have launched successful careers in Television and Film

As Vice President of Self Storage Development at The Rancon Group, Celeste Ducharme is an expert in the self-storage industry producing income, profitability, exceptional customer service and visibility. Celeste joined the Rancon Group team in 2004 to manage Clinton Keith Self Storage and is now responsible for future Self-Storage development opportunities along with working with the Rancon Group Director of Development on current projects, Ranch RV & Self Storage in French Valley, Menifee, Winchester and Temescal Canyon.

With a degree in Business Management, and thirty years’ experience in sales, buying, marketing and management for two high profile companies, Celeste works passionately to create successful, caring and motivated work environments. Celeste is a Co-Author of an International Best-Seller book, Turn Possibilities into Realities and is passionate about sharing her experiences and perseverance that has led her to tremendous joy and success in life through public speaking and mentorship consulting.

Darla Delayne is a coach, speaker and author in the business strategy arena. She’s founded and run numerous businesses including real estate, mortgage and marketing companies. With 30+ years as a corporate trainer and actress she also founded a new media and film production company in NYC and is a producer, writer and director. She raised four fabulous children while living in Austin, Manhattan and now Southern California.

Lynn holds an A.A. in Child Dev , a B.A. in Human Dev, as well as, a Certificate in Nonprofit Management from UCR. Professionally she works in early childhood teaching and program directs for schools throughout So. Calif. Her volunteer exp. includes working on several boards to name a few; Assoc. of Ed of Young Children, LA Times Festival of Books and two Temecula School visual & performing arts booster clubs Day Middle and Temecula Valley High School.

Johanna Lack is an award-winning television producer and writer who has worked on shows for HGTV, DIY, CBS, ABC, and Discovery Channel, which include House Hunters, Designed to Sell, Renovation Realities, and many, many more. As a freelance communications specialist, her work ranges from writing video scripts for JDS Video & Media Productions, to building online course pages for a leading online-education company, to writing articles that appear in local publications.

Johanna has served in various positions as a board member for Congregation B’nai Chaim, volunteers for many different local philanthropies through National Charity League, Inc, and places foreign exchange students for EF Exchange Year. Johanna is an active member of JDSCA’s Board of Directors and enjoys teaching writing to the Academy’s very creative students.

Donna San Miguel is the Associate Dean of California State University San Marcos (CSUSM) at Temecula. As the associate dean, she advocates for higher education in the Temecula Valley. She is responsible for the oversight of the two campuses in Temecula, community and business relationship development, as well as oversees a team dedicated to student services.

Donna relocated to the Temecula Valley from Arizona twelve years ago when her partner was stationed at Marine Corps Base Camp Pendleton. She obtained her Bachelor’s in Interdisciplinary studies from Arizona State University, the first in her family to attend college. She later went on to receive her Masters of Arts in Education from San Diego State University and is currently pursuing her doctorate in Leadership Studies at the University of San Diego.

She has been in higher education for over fifteen years, with twelve of those years at CSUSM. Donna enjoys working with students and helping them reach their academic goals. She is always looking for a way to help students connect to the local community whether it be for an internship, volunteer work or get their career started.

Donna is a thoughtful advocate for students, a courageous change leader and catalyst for promoting excellence in the field of education. She brings with her knowledge and experience that will help advance the mission of JDS Creative Academy.

Yvonne A. Ruiz is a Realtor with 1st Action Real Estate in Temecula, CA and Owner of Wine Country Notary. She is established with the local businesses and non-profit communities. She has been in the real estate industry, since 1996.
She has built friendships through networking and events that she attends though out the community. She helps people find their forever home to live in. Being fluent in Spanish, she gets to guide her Hispanic clients through the buying and selling process. She is involved with many organizations within the community and loves to help out any way possible.
She is originally from South Texas and has been a Temecula resident, since 2000. She is married to Adam Ruiz and has 2 wonderful and active children, Alejandro and Yesenia. She enjoys excising, reading, and spending time with family and friends.

My family, including my Autistic son Andrew, moved to Riverside County in 1989. Throughout the years since then, my wife and I advocated for special services for him. In grade school, in high school, during his transition to an adult and while an adult, we strive to help be happy and the most productive member of society possible. Andrew developed a love for Audio and Video production and JDS Creative Academy was one of those services that helped to make him happy and productive. Sadly, Andrew passed away in January of 2019. All that knew him told me they felt he enriched their lives just by knowing him.

The reason I am on the JDS Creative Academy Board of Directors is to honor Andrew and JDS. My goal is to share our experiences raising an Autistic son in order to help other young people on the Autism Spectrum and their loving families succeed in reaching their own personal goals. I will also work hard at helping JDS Creative Academy become even more successful than it already is.